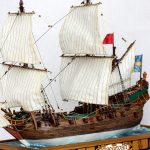 This model of Swedish Fifth Rate ‘Papegojan’ (1627) was done several years ago.

The Vasa’s dynasty reign in Sweden had lasted since 1523 when Gustav Eriksson was chosen to be a king. In 1544 the parliament announced the throne succession so after Gustav’s death his first son, Erik, became a new king.
His brother deposed him after a few years and next of them, Jan, has been known as another king of Sweden. He married Katarzyna Jagiellonka from the Polish royal family and their son, Sigismund, was elected to be a king of Poland in 1587 still being a sucecssor in Sweden. He ruled over Poland as Sigismund III Vasa persuading a Swedish crown which he finally achieved in 1594. But in 1599 Karol, the third brother of Erik and Jan deposed him. Since 1611 his son, Gustav August, had been the next king of Sweden and solution of the family but political and religious conflict had led to the war.
Denmark, Poland and Russia were treated as potential enemies of Sweden. The war with Denmark ended in 1613 but Sweden had to pay huge ransom, however, the war with Russia was won in 1617. The control the Baltic trade and ports Gustav August needed to occupy the south and east cost of the sea with a well developed navy. Before 1620 it was a small-ship navy with mainly single deckers armed with 12-pounder guns. An ambitious plan of its development included contracts for the building of five heavy armed two deckers, with the best known, but not biggest Vasa. Because a demand for new ships was higher than Swedish’s shipyard ability, some of them had to be bought aboard.
The war with Poland lasted from 1617 to 1629. In 1625 Swedes seized Inflants but the returning 10 ships were sunk in the stork near Domenas. Following year they occupied Pomerania and Prussia coming close to Gdansk. Finally, they did not manage to seize it but a blockade on the sea was established.
On 28 November 1627 six Swedish ships fougt against ten Polish ships. During the battle, known later as the battle at Oliva, Poles captured galleon Tiger and the other one, Solen, was blown up by her crew. Remaining four ships Enhorningen, Manen Pelicaknen and Papegojan sailed back to Alvsnabben and then to Stockholm.
Swedish ships were back in the south Baltic in 1628. The blocked important ports in Poland and helped Daned in Stralsund occupied by Habsburg’s army. In January 1629 Polish fleet sailed to Wismar so Swedish ships received order to establish a blockade there and after its downfall they captured all ships in the harbour. Sigismund III Vasa died and Gustav Adolf perished in the battle the same year. Sine unsolved conflicts had been solved later in the same military matter by their successors. The Swedish navy became the most powerful in the Baltic whereas the Polish fleet almost disappeared.
Papegojan (parrot) was a pinnace armed with 16 guns. It was bought by Anton Monier in Holland in 1623 on Gustav August’s order. Together with seven other galleons (Kristina, Tiger, Solen, Enhornigen, Manenm Regnblgen, Pelikanen) and one more pinnace (Regnier). It sailed to Sweden in the summer of 1624. In 1627 it took part in the blockade of Gdansk in Poland. As the smallest Swedish ship it was involved in the battle of Oliva. It came back to the waters of the Bay of Gdansk in the following year to block Gdansk again. In 1629 in the squadron assigned for blockade of Wismar. It sank in 1644.

This site uses Akismet to reduce spam. Learn how your comment data is processed.