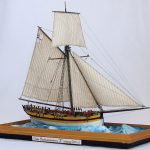 This model of English Sloop HMS Alert (1777) was done several years ago.

HMS Alert is British 10-gun cutter was launched in 24 June 1777 year. Vessel of such type was used by Royal Navy to patrol voyage transportation of mail and also against smugglers and corsairs.

The first orders direct Alert on waters of Channel La Manche to protect trading ships. Next it has been sent to western waters of channel where 18 September 1777 year in are of cape Quessant was sighted small ship. Commander of Alert lieutenant Bazely has administered combat rediness and pursuit. It has turned out that changed vessel was american brig Lenxington armed in sixteen four pounder guns and in twelve swivels guns and the crew presented eighty four persons.

Earlier that ship take part in capture fourteen ships so stocks of powder and balls were exhaustion. After short battle Lenxington has been captured. Alert has managed with the prize to England and after repair it has left on practice essential patrols.

This time to area of southern coast of Portugal where it remained for first weeks of January 1778 year.

In February in Plymouth makes changes in arming for pounder guns exchanges to six pounder guns.

In June was included for squadron Admiral Keppel during cary out routine patrol duties in company of Arethuz it has met La Belle Poule and Le Courier. 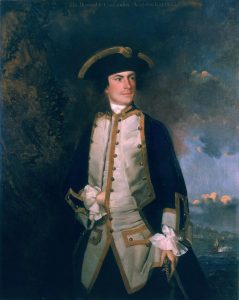 In July 1778 year Alert remained in Keppel squadron. Which flagship was HMS Victory 17 July searching for squadron of enemy Alert has been captured from surprising by French frigate Junon foundered December 1779 off the coast of America. French records show her serving as Alerte, a cutter of fourteen 4-pounder guns and valued as a prize at 32,289 Livres.

This site uses Akismet to reduce spam. Learn how your comment data is processed.